The El Food Brothers have hit up some big names for Laying The Beef To Rest. Solita, McDonalds and Burger King, Byron. But only one claims to be ‘Almost Famous‘

A better description may be ‘Quite Infamous’. Everyone has heard of this place. Those who have been claim ‘its the best burgers you’ll ever have’,  ‘it’ll knock your socks off’ and other such hyperbole. Those who haven’t been either long to go, or dismiss the place as over hyped.

Even without stuffing your face with their burgers, Almost Famous are already in your face with their ‘love it or hate it’ attitude. With cocktails named ‘Bitch Juice’, wings with ‘Pho-King’ sauce and a burger name ‘I’m Crack-ed, Baby’ (now with 22% more crack). Ironicly the  ‘Love Hate’ fries with Marmite butter is probably the least likely to offend those with a nervous dispossition.

But enough hype, the El Food Brothers don’t care what you call your burgers, theres no room for that on the 7th Heaven Scoring system. We judged Almost Famous purely on their burgers, and put all preconceptions out of our mind. Although you better have a juicy burger when your menu states ‘All Burgers Now 27% juicer’

Our Burgers are made with 100% freshly ground Beef. Each burger is served double patty as standard 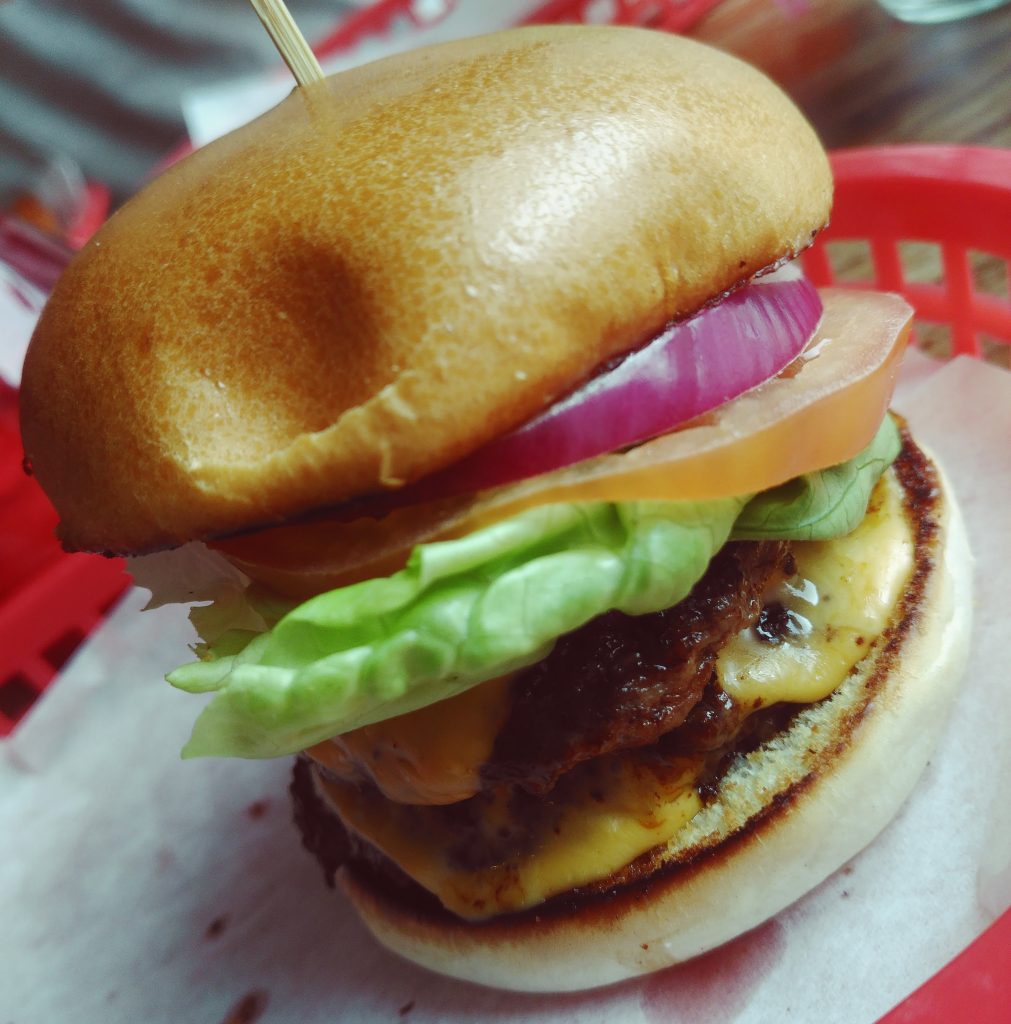 Other than that, its a nice, slightly rough and ready, looking burger. Its got a good height. A lot of that height is the lettuce leaf, but the rest is clearly on display as well. All the garnish we expect is present and correct. Double patties accounted for, with plenty of cheese keeping them together. And is that a toasted bun I spy? 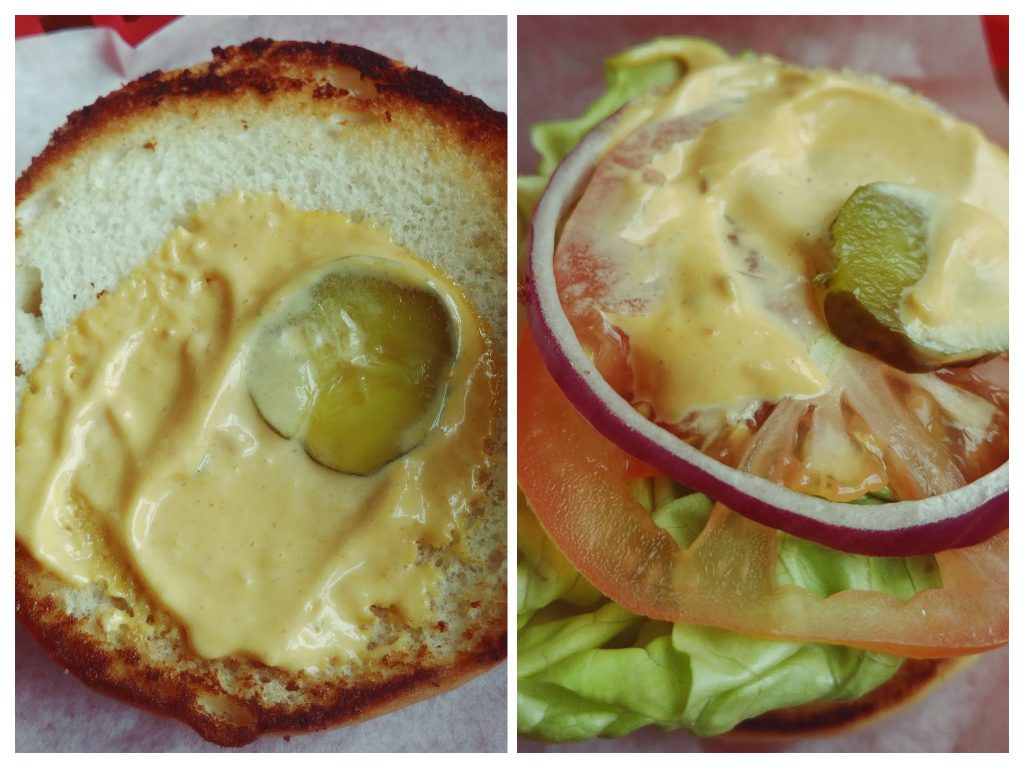 Stick has now been pulled out, and thankfully its not all come crashing down. Other than that, its a fairly standard affair with the tops off. McDonalds standard issue 2 pickles, almost seem like they shouldn’t be there. We are clearly getting a decently toasted bun, but its a shame to see the top of the bun is not completely covered in sauce. The sauce looks heavier on the garnish, but that does mean we are getting a bit of over spill already. 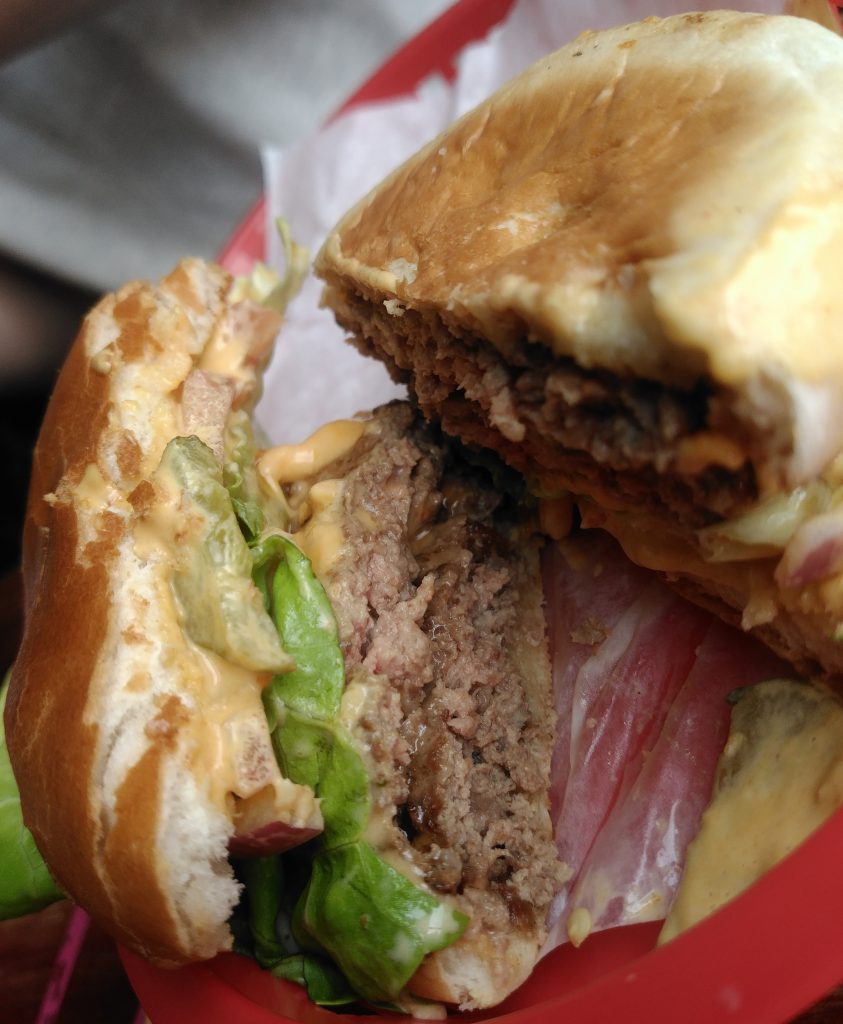 A slighly messy cross section, that sauce is starting to get things soggy, but its holding up well. With the garnish squishing down, the double patty is clearly making up the bulk of this burger. Its plenty juicy, with a hint of pink. I can’t confirm its 27% juicer though. The cheese is less obvious in this shot, suggesting it may struggle to be noticed amongst the meat.

Its hard to be subjective with a place like Almost Famous. If we are honest, we were set to be let down by their standard cheeseburger, expecting them to rely more on novetly than quality to sell their burgers.

But the scores speak from themselves, and slightly suprised us. This is so far, scientifically, the best burger we have had this month.

A strong, yet soft bun, only faltering slightly with a bit of sogginess. The patties are juicy and a strong taste comes through, even amongst the sauce and cheese. Garnish is all there present and correct, even the onion which has been missing on many other burgers.

A few things keep this from a near perfect score however. We have been spoilt by Byron’s version of american cheese, and the Almost Famous cheese just seems lacking in flavour. The sauce as well causes a few issues. Its both too much in some places, and not enough in others, but overall lacking a punch to take it above average. Usability loses a point due to a slight soggyness to the bun, and some sauce spillage in parts.

Almost Famous have just snuck into the lead on the hunt for the best burger in Manchester. With just over a week to go, will we find a better burger? Can any score perfect marks? We’ll find out as Laying The Beef To Rest continues