Laying The Beef To Rest continues with a visit to 2 well know burger franchises. If you haven’t guessed it yet, its the Joker (McDonalds) vs The King (Burger King) in a battle of the cheeseburgers.

We managed to do both of these on the same day, so both were judged mere minutes of each other, as they are now handily situated across from each other in Piccadilly Gardens.

The El Food Brothers are well versed in the ways of the fast food burger. We are by no means food snobs, and both appreciate the occasional BK or Maccy’s. But its a least a first for me to visit both in the same day, and I don’t recall ever actually ordering the plain cheeseburger at either place, so this could be interesting.

The simple classic made with a 100% beef patty, cheese, onions, pickles, mustard and a dollop of Tomato Ketchup – all in a soft bun. 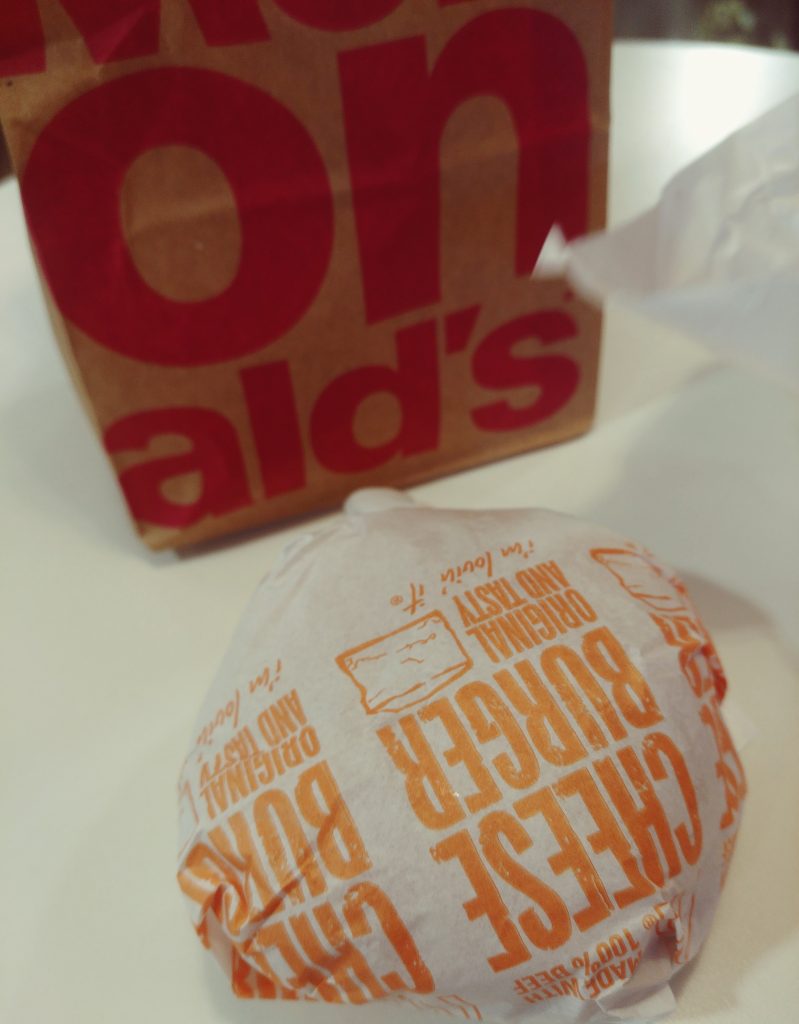 Served in a bag labeled ‘McDonalds’ you at least know where you are. The burger itself keeps up the handy labelling. Its a Cheese Burger, and its original and tasty, apparently. Other than that, its keeping itself unwraps, teasing us with what might be inside. We’ll just have to undress it to check it out. 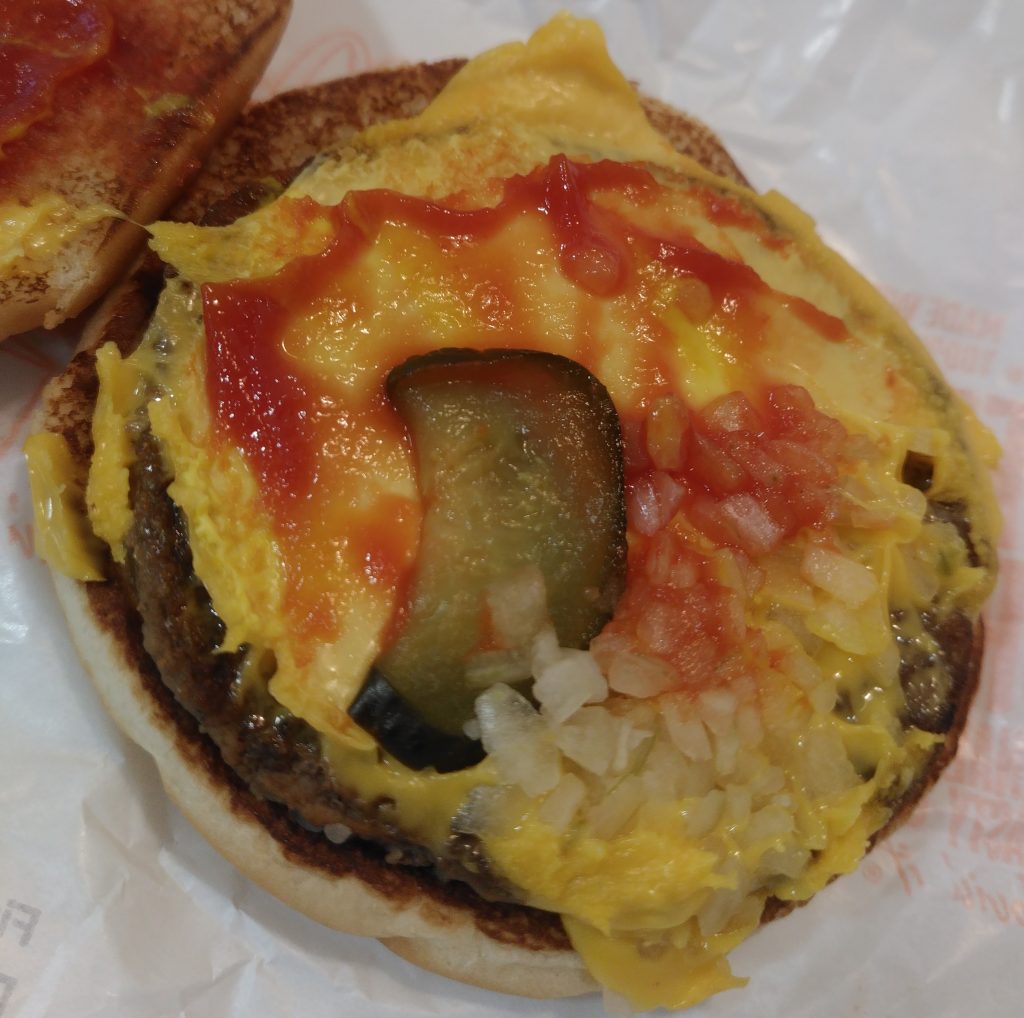 Its all there, as described. Pickle (one), some finely chopped onions, on one side at least. That cheese looks a bit sorry for itself, particularly dried up round the edges. Plenty of Ronald’s secret sauce on there though.

Theres a patty under there somewhere as well, looks to match the bun size at least. 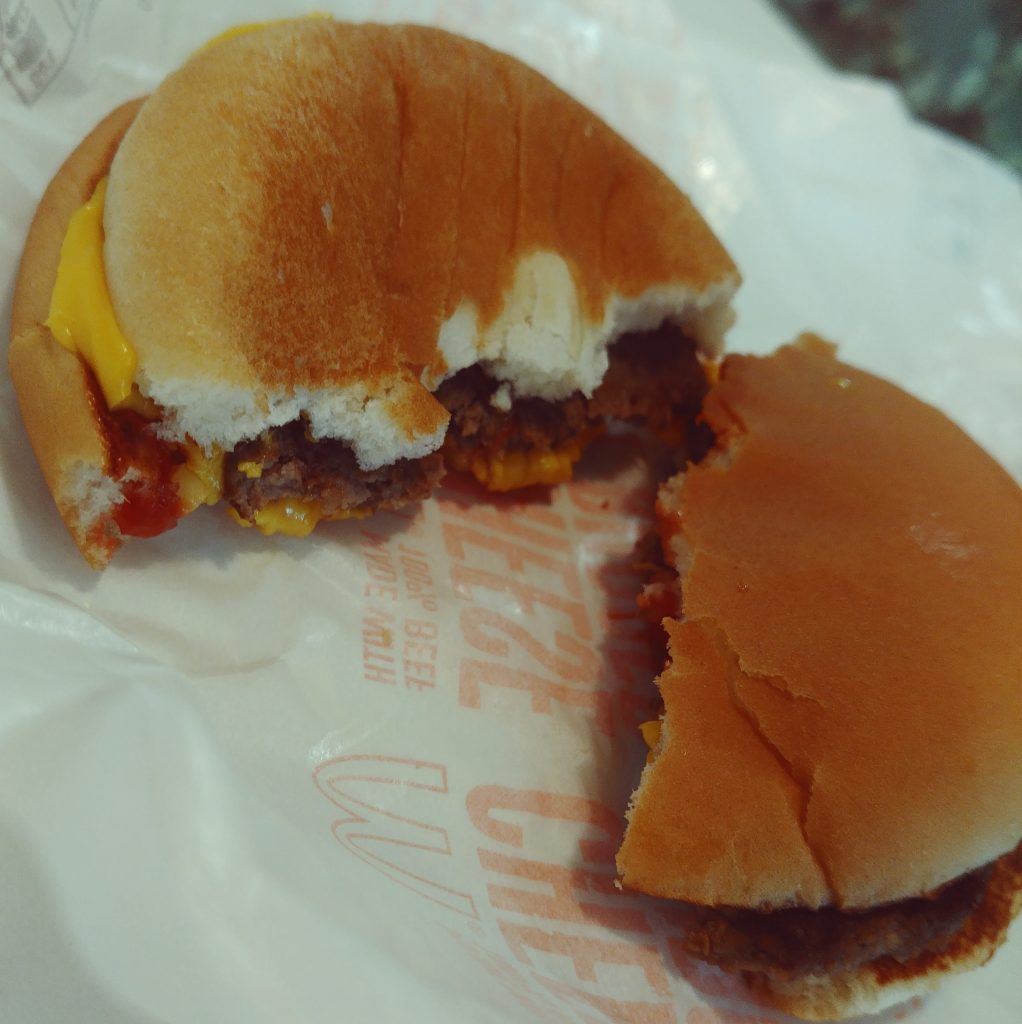 El Food Twos patented dissection method, that wasn’t invented for the Solita review. Heres the burger split in half, with one half upside down. Bottoms up so to speak. Not much more is revealed by the dissection. Its a bit flat, so hard to get a decent cross-section. Theres no more to the burger though, we’ve seen it all. Bun looks decent enough, soft but sturdy.

With its small form factor, the McDonalds Cheeseburger scores top marks for usability. You can munch this one handed no problem. The downside of this, is it means a dried up patty, with little flavour. The cheese is mostly there for show, with a heavy amount of sauce masking the fact most of the other ingredients are lacking flavour. The onions and pickle aren’t bad though, but missing anything else such as tomato and lettuce. But its 99p, and there probably isn’t a better burger you can get for that price. Or is there Mr King?

Made from 100% beef topped with a slice of melted cheese, pickles, ketchup and mustard all wrapped up in a sesame seed bun. If it aint broke, don’t fix it. 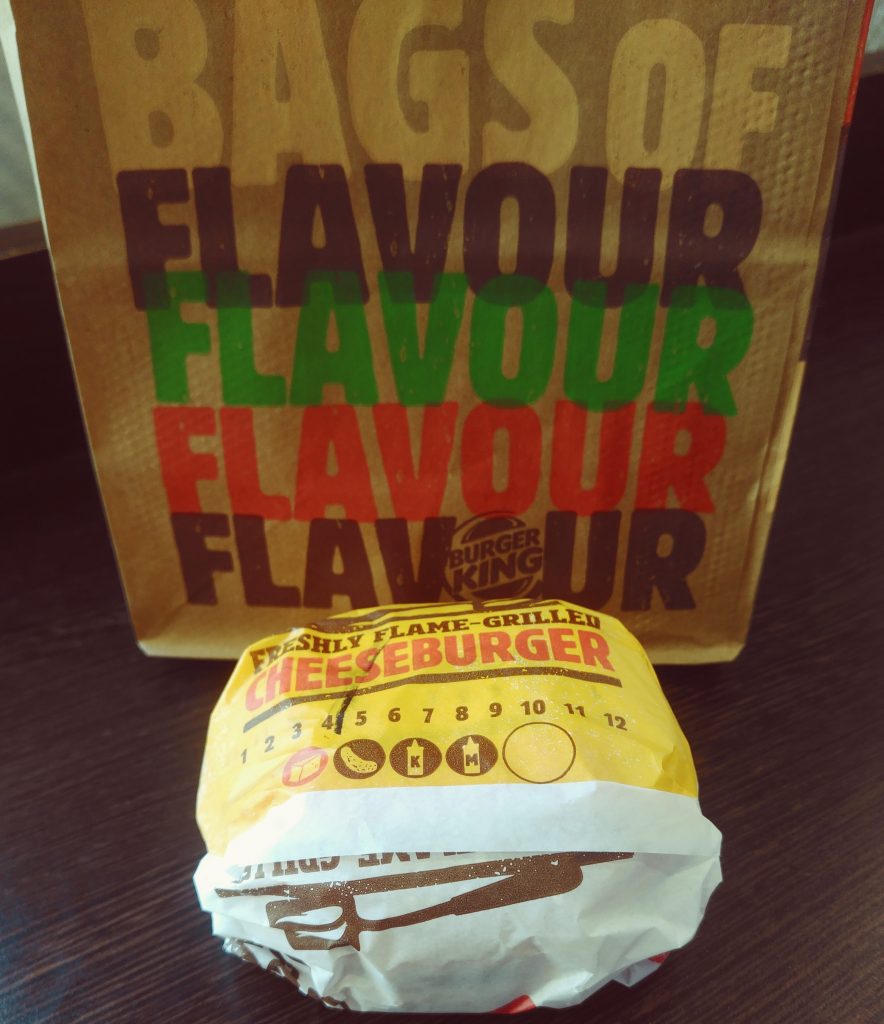 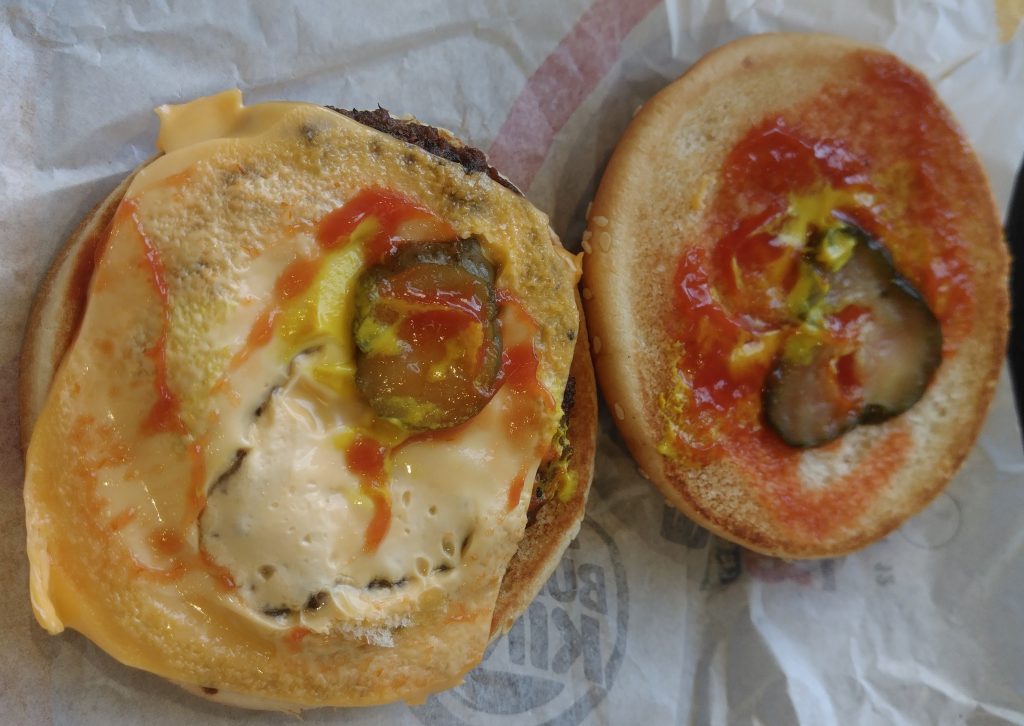 Similar scenes to McDonalds. We’ve got 2 pickles, but an absolute crime that theres no onions. That cheese looks pretty shrivelled up, and the burger it almost hidden by the cheese, if you look carefully you can tell its significantly smaller than the bun. Less sauce than the Maccy’s, maybe they are confident in the moistness of their patty. 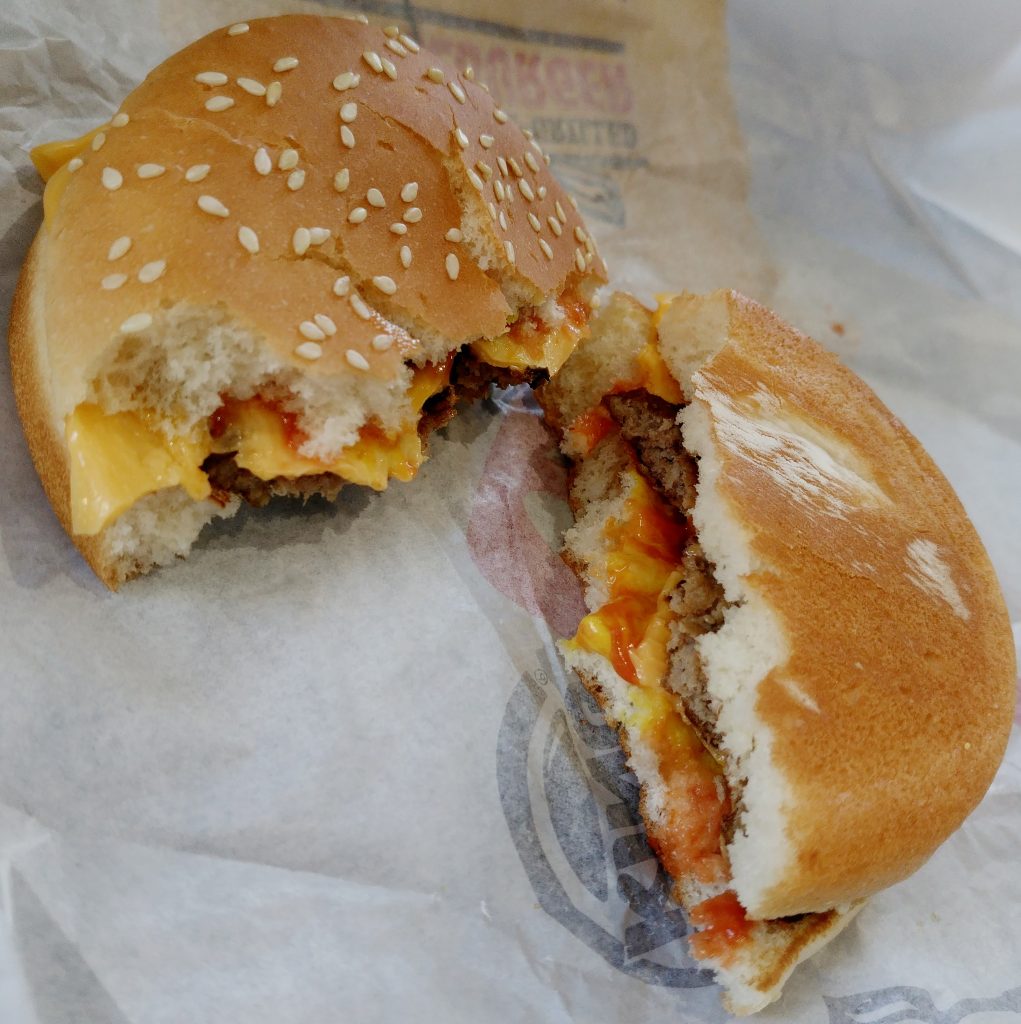 Nice to see a seeded bun, its one up on McDonalds. Again bun is soft but sturdy enough for the contents. But we are not seeing a lot of patty in there at all.

The BK cheese burger disapoints when directly compared to McDonalds. The patty is smaller, and even more dried up than Maccys. It does have that flame grilled taste, which is its only plus point. With it being smaller than the bun, you are often just eating bread with tasteless cheese. No onions is a big no-no for the El Food Brothers. It fits in one hand though, so its got that going for it. At 99p its not the worst thing you can do for a quid. But you might as well pay the Joker. The King looks more like a thief.

Its clear McDonalds wins this round. And with it being an decent enough burger, at an extremely low price, it scores close to Solita. A surprise for both the El Food Brothers, but the 7th Heaven scoring system does not lie.

Theres plenty more places to try before we crown the winner though. With our next visit being both a chain, but more of a ‘proper’ restaurant. Will they knock Solita off the top spot? Find out soon as Laying The Beef To Rest continues.